Built 1985 for John Biggs and raced out of Pwllheli, North Wales with considerable success.  Checkmate won the Welsh ¾ Ton Championships in 1985 and regularly competed in the ISORA offshore series, becoming the overall winner of ISORA in 1988.  Following her sale in 1989 she was renamed Silver Dollar and based in Scotland.

Silver Dollar unfortunately broke her mooring in September 2012 and was virtually destroyed.

We had 5 fantastic years with Checkmate during which time a number of us youngsters began developing the skills that would help us throughout our sailing careers.  A few years after the sale of Checkmate I began owning my own boats and campaigned them under the banner of Checkmate Sailing Team so the name lives on! 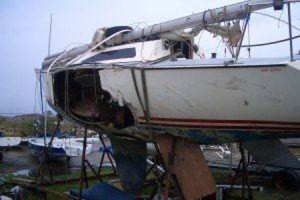